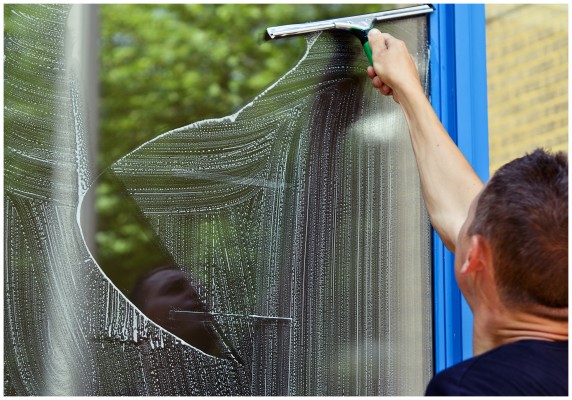 Restaurant chain, Loch Fyne has been fined after a window cleaner was caught on camera balancing dangerously on a third floor ledge of one of its buildings (see video at the bottom of this article).  The Greene King owned company admitted one breach of health and safety law and was also ordered to pay costs of £3,023.

Wayne Mallon, the self-employed cleaner at the centre of the health and safety scandal, pleaded guilty to three health and safety charges at Bath Magistrates’ Court and was fined £2,000. Wayne Terence Mallon, a self-employed window-cleaner, was filmed by a passer-by working his way from window to window without any safety precautions on the third floor of the Loch Fyne restaurant in Bath in September 2012.

He was seen coming out of a third-floor window some 40ft above the ground, and climbing over the stone balustrade around the building to get from window to window. He then climbed out of a second-floor window and used the narrow stone lintels above each opening to move around. Mallon was not wearing any fall restraint, and there were no other measures to prevent, or mitigate the consequences of a fall.

The video footage, posted last September on YouTube, quickly went viral has attracted more than 90,000 views.It came to the attention of the health and safety team at Bath and North East Somerset Council, which brought charges against Mallon and Loch Fyne. The film was shown to magistrates and Loch Fyne admitted allowing a contractor to work at height in an unsafe manner.

Robin Wood, representing the Council, told the court that the firm had a duty of care to contractors, adding:

“If a suitable risk assessment had been carried out, Mr Mallon would not have endangered himself or others below in the way he did. There were a number of documents in place to make sure a risk assessment was possible but they were not being used and had not been checked by the company for more than eight years. We have no evidence that this happened on more than one occasion, except he seemed to know what he was doing.”

Speaking outside court, a Loch Fyne spokesman said the company took health and safety extremely seriously and expected the same from its contractors.

“We accept today’s decision and are grateful this isolated incident in Bath was brought to our attention. As a result we have put tighter measures in place to prevent anything similar happening again, including stricter procedures for our restaurant manager to follow when using external contractors.”

Loch Fyne, which employs 1,234 staff at 42 restaurants and four hotels, said it was the first time it had ever appeared in court.