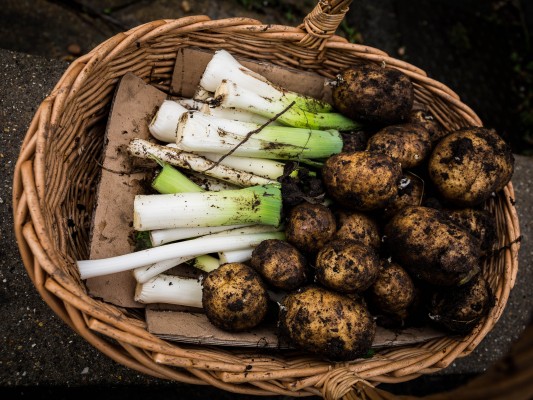 A rare, slow-motion outbreak of toxic E. coli sickened at least 250 people and killed one across the United Kingdom over a span of eight months this year before being traced to raw leeks and potatoes, the Health Protection Agency (HPA) recently announced.

The HPA said it monitored the outbreak for six months as people continued to fall ill, but officials chose not to acknowledge the illnesses publicly because they had not identified a source. Months of inquiry have now led investigators to link the outbreak to people handling raw leeks and potatoes in their home kitchens.

Authorities said the victims were sickened by a rare form of E. coli O157 known as Phage Type 8, or PT8. Of the 250 reported case patients, 74 were hospitalized, four of them with kidney failure attributed to hemolytic uremic syndrome (HUS), and one died.

The outbreak is believed to have begun last December and continued into July. Cases were scattered across the UK, with 193 in England, 44 in Scotland and 14 in Wales. One hundred of the victims were children under age 16 and 69 percent were female.

The HPA said interviews with victims eventually led them to root vegetables prepared in homes.

“Our study showed a statistically significant association with raw loose leeks and potatoes from sacks, but these vegetables may not be the only source of contamination, HPA gastrointestinal expert Dr. Bob Adak said in a formal agency statement.

“It is possible people caught the infection from cross-contamination in storage, inadequate washing of loose vegetables, insufficient hand washing after handling the vegetables or by failing to thoroughly clean kitchen equipment, utensils or surfaces,” he said.

Should the outbreak investigation have been better publicised?

The HPA were criticised for their handling of the unpublicised eight month E.coli outbreak. The Fresh produce industry trade authority, the Fresh Produce Consortium (FPC), accused the HPA and FSA of having “complete disregard” for the industry through their lack of communication during and after the outbreak.

Fresh Produce Consortium Chief Executive Nigel Jenney said he was, “amazed at the HPA and FSA’s poor liaison with the industry.”

He added that the HPA’s decision to make a public statement without sharing their findings, “smacks of having a complete disregard of any consequences on the industry and on consumer confidence.” “It’s vital that UK authorities liaise and share information with us much sooner, and that they understand more about industry processes as part of any thorough investigation before pointing the finger at certain sectors of the food industry. Instead we are being blamed without being given the opportunity to review the evidence on which this conclusion is based,” said Jenney.

The HPA has argued that news of the outbreak was not publicised due to its origins being unknown. Gastrointestinal disease expert at the HPA, Dr Bob Adak said,

“Now that we have established a statistically significant association with the handling of the certain loose vegetables, it warrants us sharing these findings with the public, to enable them to take the necessary steps to minimise their risk of food poisoning.” “As soon as the HPA, Health Protection Scotland and Public Health Wales saw an increase in this type of E.coli O157 we began an investigation to find the cause of the outbreak. The multi-agency Outbreak Control Team, which included colleagues at the Food Standards Agency, worked together to find out how people were becoming infected so that action could be taken.”

The FSA has commissioned research that looked at consumer attitudes and behaviour towards food safety when preparing vegetables. It showed:

• the perceived risk of food poisoning from vegetables was low, whereas most consumers questioned were more cautious when handling meat

‘It’s sadly a myth that a little bit of dirt doesn’t do you any harm; soil can sometimes carry harmful bacteria and, although food producers have good systems in place to clean vegetables, the risk can never be entirely eliminated. Control of infection from E.coli O157 relies on an awareness of all potential sources of the bacteria and high standards of hygiene where it may be present. ‘This outbreak is a timely reminder that it is essential to wash all fruits and vegetables, including salad, before you eat them, unless they are labelled ready-to-eat, to ensure that they are clean. It is also important to wash hands thoroughly as well as clean chopping boards, knives and other utensils after preparing vegetables to prevent cross-contamination.’