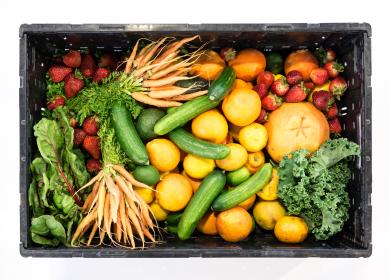 The source of Germany’s E. coli outbreak (which has so far sickened 1,800 people and killed 20) now seems to be focussing on a grower of bean sprouts.

We look at how to reduce the risks when serving uncooked fresh produce and in particular bean sprouts.

When checking ready to eat vegetables and fruits to choose, avoid any that are bruised or damaged, which would include even minor breaks in the surface. That’s because bacteria can hide in the damaged areas and from there spread rapidly through the rest of the vegetable or fruit.

In the case of fresh-cut produce – bagged lettuce or sections of watermelon or cantaloupe, for example – make sure they’re refrigerated.

Make sure fresh produce has been segregated from meat, poultry or seafood products during transportation.

Keep fresh produce in the refrigerator at 8◦C or below. This not only maintains the quality but also helps prevent the spread of any pathogens that might be on the surface of the produce.

When you’re ready to prepare the produce, start off by washing your hands – before (and after) preparing and/or eating the produce.

Cut away any damaged or bruised areas. Then gently rub the produce while you hold it under running water.  If you plan to peel the produce, which is often the case with cucumbers, make sure you wash it before you peel it. And make sure the utensil you’re using is clean.

When washing firm produce, such as cucumbers or melons, use a clean vegetable brush to scrub while you hold the vegetables under running water.

Another tip, when applicable, is to slice the blossom and stem ends off fresh produce after washing because bacteria and dirt are often trapped there.

It is a good idea to use a food sanitiser (such as Drywite Fresh Produce Wash) to ensure that any remaining bacteria are killed.

Follow that up by drying the produce with a clean cloth or paper towel.

Can foodborne pathogens be inside fresh produce?

There is research to suggest that E. coli pathogens on the surface of tomatoes and lettuce can migrate from the surface to lower layers of tissue to colonize vegetables.

Amongst experts however, the jury is still out – there have been no proven outbreaks that have occurred solely as a result of internal contamination. Many experts believe that food borne pathogens cannot penetrate the surface of fresh produce without some sort of opening, such as a micro-wound on the surface.

In the case of cut salad greens, however, pathogens can be a problem because when leaves are cut during harvest, nutrients begin to ooze from the cuts. That, in turn, attracts any pathogens that might be on the leaves or in the immediate area. When that happens, the pathogens cling tight and cannot be dislodged and antibacterial solutions won’t be able to rid the produce of pathogens.

As the German authorities investigate growers of bean sprouts as a potential cause of the German E.coli outbreak, it seems sensible to re-iterate the advice given by the Food Standards Agency following a UK food poisoning outbreak.

Bean sprouts were identified as a vehicle of transmission in a Salmonella Bareilly outbreak that affected at least 240 people in 2010.  Investigations during the outbreak identified mishandling of bean sprouts at catering establishments as a potential cause.

This may be because of confusion or misinterpretation of the information on the packs. For example, some of the ‘non ready-to-eat’ bean sprouts were labelled as ‘washed and ready-to-use’ which may have led users interpreting this as ‘ready-to-eat’ rather than ‘ready-to-cook’.

To be completely safe, bean sprouts must be cooked thoroughly until they are steaming hot. If large bean sprouts are added to a stir-fry, they should be simmered for a few minutes.

– Avoid sprouts that have turned brown or have a strange odour.

– Follow any instructions on the packaging and use the bean sprouts by the ‘use by’ dates.

– People with weakened immune systems, as well as the very old and the very young, should not eat raw sprouts  – therefore if possible caterers should not serve raw bean sprouts.

But how would sprouts become contaminated with a toxin associated with cow excrement?

Blame it on healthy growing conditions, according to Dr. John Kobayashi, a veteran epidemiologist in Seattle who now teaches at the University of Washington.

“Sprouts pose “an inherent problem” for foodborne illness, Kobahashi explains. If the sprout seed becomes contaminated — perhaps by cow manure from a neighboring field – the sprouts can become a carrier. Even worse, they become “an incubator,” he adds. The sprouts and bacteria are nurtured by precisely the same combination of heat and moisture. “The juice in the sprout container is inevitably loaded with bacteria, most of which are harmless.”

But if they are contaminated with toxic Salmonella or E. coli, the bacteria grow happily with the sprouts, and may survive a cold water wash. Because the sprouts are almost always eaten uncooked, there is no “kill step,” no opportunity to heat the food and kill the offending bacteria.

The bacteria gets into the cracks of the seeds. When the seeds are sprouted, the bacteria thrives. They both end up in somebody’s salad. And, a week or so later, somebody gets sick.”