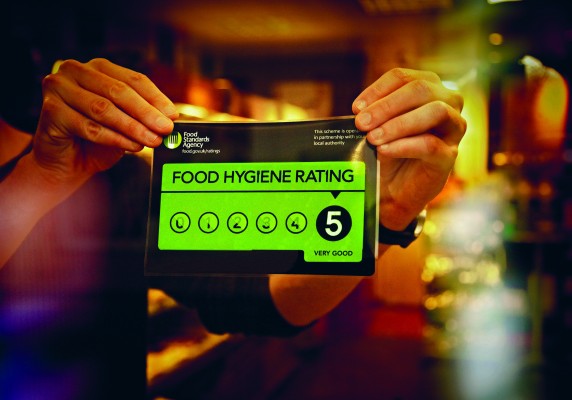 The press are increasingly using the FSA’s FHRS website to generate public interest stories. Here are excerpts from some articles seen in August 2012.

Cafes, restaurants and takeaways in mid Wales are having their hygiene ratings rechecked after a cafe in Aberystwyth was found to have the wrong score on an official website.

The “isolated error” on the Home Cafe score has now been corrected.

It is rated 4 out of 5, but was down as 2 on the Food Standards Agency website. Ceredigion Council blamed a mistake in transferring the new rating to the website. “The food safety team has worked hard with the Home Cafe to improve the food hygiene standards since the introduction of the Food Safety Rating System,” said a spokesperson for Ceredigion council. “As such it has been re-scored a number of times as standards have improved, and it is pleasing that the premises now has a ‘good’ rating of 4.”

The council said it “unfortunately” appeared that the new rating was not transferred properly from the council system to the Food Standards Agency website.

“We are grateful this has now been bought to our attention, and the score has immediately been altered.

“As a precaution the scores of other premises are being checked for accuracy to avoid any other errors,” the spokesperson said.

It is claimed that some of Thanet’s top restaurants have been given rock-bottom food hygiene ratings simply for not filling in paperwork. Restaurateurs are concerned reputations could be damaged by low scores for administrative technicalities.

Award-winning Indian fusion restaurant The Ambrette in Margate was one of eight eateries that scored one out of five in its inspection. Executive chef Dev Biswal welcomed the scheme’s aims but feels the scoring system is deceptive and potentially damaging to businesses.

Mr Biswal said: “They are trying to improve hygiene standards and businesses should take advantage of the free advice on offer.”However, I think it should be a constructive not a punitive process.

“The main issues raised were about our listed building such as floor surfaces and monitoring of fridge temperatures.”They made some suggestions which we complied with within seven days but were still awarded a score of one star. We have been told that we would now get a five star but are still waiting for re-inspection.

Milo’s Bar on Margate seafront was another to suffer on minor details. The bar prides itself on its hygiene and cleanliness but received a low score after it failed to produce its health and safety logbook.

Owner Simon Craig said: “Personally, I don’t look at the Scores on the Doors when choosing where to eat.”I go on past experiences of restaurants and it’s just a joke if a top, award-winning place like the Ambrette is getting scored one out of five.”

Beverley Cook, of the Food Standards Agency (FSA), said: “Inspectors’ visits are unannounced and are designed to give consumers a glimpse into the kitchen.”They provide kitchens with all the information they need to score 5 out of 5.

“The inspector needs to have confidence that business can maintain high levels of food hygiene when they are not there and will work closely with business to help them achieve that.”Businesses can always request a second visit after they have complied with the recommendations and receive a updated score.”

Hundreds of pubs, cafes, restaurants and takeaways have been told to improve food hygiene standards.

East Riding Council’s own catering unit at Beverley’s County Hall was told to improve after receiving a rating of two.

Councillor John Hewitt, of Hull City Council, said: “In these difficult economic times, people are trying to cut back on all sorts of things to survive and sometimes they might fall foul of the rules. “Of course, it’s worrying when we’re getting zero ratings but we are endeavouring to try to stop this happening. “It’s a constant battle. We are not there to get businesses to fall foul of the ratings, we are there to get them to improve their businesses.”

Darren Stevens, head of culture and information at the council, said the council’s own catering unit was inspected earlier this year.

He said: “The inspector could not fault the service on management or service delivery but highlighted a number of infrastructure issues that required improvement.” He said the unit is due for another inspection and the council is confident its rating will be increased.

He said: “The council’s catering service operates at a number of venues around the East Riding, such as at Sewerby Hall and Gardens, The Spa Bridlington and Goole Leisure Centre, all of which operate at a five rating, the highest standard of compliance under the food hygiene rating scheme.”